I finally update, I'm sorry for the delay in all the updates, I was pretty busy with a lot of other works that I do like Storyboarding for a local animation company and other local comics as well but I was actually done with that about 5 days ago. After that I actually got Monster Hunter 3 Ultimate for the 3DS and that damn game... that damn game is so addictive... I'm very sorry about that. But I'm starting to slow down on it right now and I'll be getting more strips done for updates.
Posted by Remy 'Eisu' Mokhtar at 10:02 PM 1 comment:

Today's update (comic strip dated 24th July 2010), I drew a little cameo appearance of Paul Taylor, creator and author of Wapsi Square, an excellent and popular online comic about stuff that are supernatural and mystical. If you haven't read it yet (which, I find pretty impossible, ha ha ha) I reccomend you check it out. The comic have been running online for a long time now so there's a lot of pages there, but it's all worth it.

Edit:(Also, I just realized, on July 12th 2010, a guest comic I did for Wapsi Square appeard on the website, so if I had actually updated on time and never had to backtrack, this cameo appearance and the guest comic would've come up around the same time, ha ha ha ha)
Posted by Remy 'Eisu' Mokhtar at 11:59 PM No comments:

Here's something fun, I made a favourite character poll in the No Pink Ponies facebook page, so check it out and cast your votes.

Click here.
Posted by Remy 'Eisu' Mokhtar at 8:38 AM No comments:

As was pointed out in the comments of yesterday's update (which is still up right now cos for you guys, it's still today but it was yesterday for me), I totally forgot that Azalea was wearing glasses when she went on the date with Maureen, so I fixed that up and the comic will be updated with glasses wearing Azalea probably in a couple of hours. I also fixed up the incentive image to include the glasses as well, so, hey, click vote if you wanna see the updated image. And yes, this is a blatant attempt to get more votes.
Posted by Remy 'Eisu' Mokhtar at 12:53 PM No comments:

No Livestream to follow with today's update, I just drew it by myself and all that. But I wanted to post here to tell you guys about Penny Arcade's new online reality show, Strip-Search. It's basically a reality show about webcomics. I just checked out episode 1, I like what I'm seeing and I can't wait to see more of it. Mike and Jerry, all the best to you guys with the production of the show and all the artists that manages to enter the show, BEST OF LUCK!! I'll be watching every week!!

Also, don't forget to vote for No Pink Ponies on the Top Web Comics List, thank you ^^ If we can keep NPP on high ranks, I'll get to doing more and more incentives ^^
Posted by Remy 'Eisu' Mokhtar at 6:12 PM No comments:

And here is the livestream for today's update.
And I wanna thank everyone that voted for No Pink Ponies yesterday and today. As of the minute I'm writing this, we are actually in the top 50 of the Top Webcomics List! Yayyyy! Thank you so much everyone, I will try to get some more incentives done (maybe as a weekly thing, it'll give me an excuse to draw a No Pink Ponies based illustration). Also, vote every day! Thank you again ^^
Posted by Remy 'Eisu' Mokhtar at 6:02 PM No comments: 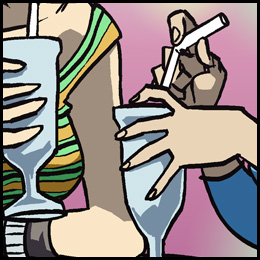 I just did this drawing of Maureen and Azalea on their date. Interested in seeing the full image? Well, it's the incentive image for the Top Web Comics List! If you vote, you get to see the full drawing, so yeah, cast a vote. Thank you.
Posted by Remy 'Eisu' Mokhtar at 4:14 AM No comments: