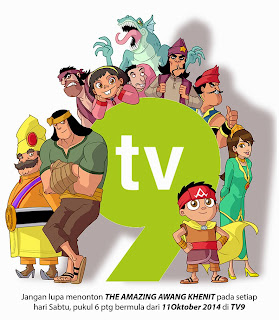 Hello everyone, I'm sorry I've been laxing on No Pink Ponies again, but work on the project I'm promoting right now is exactly the reason why, but it's a really good project, I'm enjoying it imensely. It's a TV animated series that's being produced by my company, Sead Studios for local Malaysian TV (I'm from and currently in Malaysia, in case you didn't know). I'm really proud of this project I'm working on and unfortunately, because of it, I have to cut back on other stuff I work on, but, hey, those who are in Malaysia can finally see this project make it's broadcast debut on local TV this Saturday, 11th of October 2014, on TV9 at 6pm, so, if you get the chance to, check it out. I'm never one to toot my own horn (jokingly, yes, but seriously, no) but I have to say, and this is no joke, this show is really good. I love working on it and I'm really proud of it.

When I get some lax time, I'm definitely coming back to update my comics. Wait for it!
Posted by Remy 'Eisu' Mokhtar at 10:34 AM 3 comments:

Ahhh, one thing that I forgot when your comic is not backdated or is supposed to be back on actual schedule is people complaining about my comic not updating, despite the fact that the comic is free. I guess the couple of minutes it takes to check if the comic is updated or not would be time wasted and frustrating enough for complaints (and calling false advertising and everything).

Now, lately, yes, I haven't updated because I've been busy finishing up Sandra on the Rocks vol.1 for Pixietrix. This is another online comic I'm involved with that's written by Dave Lumsdon. Finishing up stuff for volume 1 took up a lot more of my free time than I thought, so I had to put my non-paying stuff on the side. The thing about No Pink Ponies is that it's a passion project. The 8 years I've been drawing this comic on and off is totally done as a side project while I have a day job and other paying jobs. Sandra on the Rocks and even Marry Me (though this one is not updating for now too but that's cos the Crosbies are going through some family health issues currently so I don't wanna push them for scripts) are paying jobs. So when I get the scripts from the people who hired me to draw those comics, I put them on priority. I also have a day job where I am an animation director and animation in general takes up A LOT of my time. This day job takes absolute priority over everything else.

No Pink Ponies, sadly, does not get enough from the ad revenues on a monthly basis for me to drop everything else and concentrate on drawing this. Yes, I wish I can follow the update schedule to a T, but sadly, I can't when hectic times come upon me forcing me to not be able to do anything else other than my paying jobs. My schedule is crazy enough as it is, I sleep maybe 3-4 hours a day if I'm lucky, to take out another 2-3 hours out of this to make a No Pink Ponies comic strip? That's kinda hard. Plus, when I get home from the office, I get super exhausted, most of the time I have no more energy to do anything else. I'll try my best when I find the time, but this does not happen a lot.

Now, you say, "Why not just mention you update occasionally, that way I won't be fooled by false advertising", why yes... yes I can do this... but I choose not to because is it false advertising? I guess it kinda is except that when I do update, it will be Tuesday, Thursday, Saturday and Sundays. So, I figure, just leave it as it is and when I update, it will be at those days, occasional or not.

Actually, I'm really glad that the lack of updates frustrates you, cos that means you like the comic enough to get frustrated by it missing it's updates. I'm also sorry that it frustrates you cos truth be told, I would love nothing more than to just draw No Pink Ponies every day and nothing else. But this won't pay my bills, I know, I've tried it. No Pink Ponies just don't garner enough views on a daily, weekly or monthly basis for me to make money out of it. I wish this wasn't the case, I wish that if I were to update more regularly more people will come, but I did, at one time, updated everyday for a little more than a month back in 2012 (this was back during my, apparently "BS" backdating phase) but it didn't happen. My views are still the same, I didn't make enough money that month and I had to scrounge around and look for other jobs to pay my bills. It's the sad truth, No Pink Ponies is just not that well known to make good money for me.

I plan to put a Patreon link here soon when I'm more stable on my feet and can meet the Patreon goals, but til then, all I ask is that you be patient and wait it out with me as best as you can.

Just think of it like this, the comic is free, you literally do not pay anything to read it right now. When I can, I will update it.
Posted by Remy 'Eisu' Mokhtar at 7:18 PM 10 comments:

Latest news of me!

So, I've been very quiet, sorry about that. Cos of influx of other works, I had to take a week off from No Pink Ponies, but the comic will return this Tuesday with fresh new updates, so yeah, please wait a wee bit more ^^
Posted by Remy 'Eisu' Mokhtar at 5:05 PM 1 comment:

Yeah, so, for the next two weeks or so, it'll be guest strip time while I rest and/or draw some buffer strips.

Comics on halt for now...

I know this is scary to hear since I've been doing good on myupdating, but my grandmother just passed away, so I'll be going back to her place for the funeral and will not have access to any computers and cannot work on the comics, so Tuesday's update will definitely be skipped.

I'll try my best to get an update up for Thursday.
Posted by Remy 'Eisu' Mokhtar at 9:22 AM 7 comments: 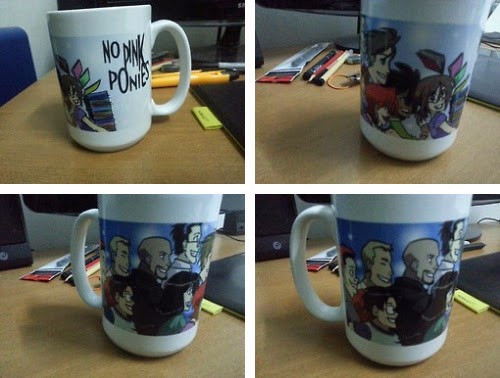 Heya NPPers,
I actually forgot to mention this to you guys cos I was at that time busy with everything else and then promptly forgotten about it, NPP has a wee bit of merchandise going on right now! I actually used the Deviantart shop to make a little No Pink Ponies mug. I got one for myself and I gotta say, it looks pretty darn good. If you want em, you can get em right here:

Will there be future merchandises? If this mug does well, then for sure, if not, I'll think about it.
Posted by Remy 'Eisu' Mokhtar at 5:31 PM 4 comments:

So, I made this post over at my Tumblr a couple of days ago and now I'm opening it up to NPP readers as well:

Calling Webcomic artists (or non webcomic artists and just internet artists in general), I wanna do some guest spot for No Pink Ponies for the first time since it’s been online for 8 years, I’m probably gonna run it for like 2 or 3 weeks, so that’s 4 updates a week if I include Sundays as well (the update days are Tuesdays, Thursdays, Saturdays and occasional Sundays) so I can probably take 12 artists, so if anyone’s interested, please send me an e-mail at eisu.verse@gmail.com or send a PM in either Tumblr or Facebook (both links can be found on the side bar there).

As mentioned in today's comic, I've stopped trying to catch up with all the missed backdates and decided to time skip the comic to present time, so the comic that updates today represents a 3 years later kinda deal. I felt especially comfortable with this move cos I think I've settled what I need to settle in terms of storyline in the past so now I can time skip the comic without it being too awkward or long.

I think psychologically as well, the backdated-ness gives me this whole "I don't have to update now, let's settle all other stuff first" kinda feel in drawing this comic cos I don't feel the pressure of the current date that I need to update, so with this time skip, I'm hoping that I'll actually put importance in updating on time (though I'm pretty sure I'll miss some, but hopefully it won't be weeks or months anymore) like I do for my other comics that I collaborate with other people.

Don't worry though, I will insert little nuggets of what happened the 3 years that I skipped as we go along this new chapter in No Pink Ponies. I'm excited with this move and I think it'll be the start of a great era for this comic. So, please, enjoy the now presently timed No Pink Ponies.
Posted by Remy 'Eisu' Mokhtar at 3:21 PM 3 comments:

Lately I've been seeing a bit of a spike in visitors and some new comments being posted in old strips and stuff and I feel like I should give some explanation to new readers and visitors. Welcome to No Pink Ponies, it's hardly updating these days cos sadly, I cannot work on it full-time to support my life with bills and other stuff. I have a day job at an animation company I helped co-founded with some friends, we're still new so that means then everyone has to pitch in 110% of the time and that's why I hardly have the time to work on No Pink Ponies cos, despite the ad revenues I get, it's not enough to pay my bills.

Now, some of you might be wondering, "But you're updating quite regularly over at Marry Me and Sandra on the Rocks." Yes, I am regularly updating there, but that's cos I get paid by the people I'm collaborating with to do those comics, so there's an obligation there.

With No Pink Ponies and Rumble Fall, it's a work of passion. Like I said, I do get paid from the ad revenues, but I don't really track that much hits and visits every day, or at least not enough for the ad revenues to be my source of income, so sadly, I have to forego drawing both my passion comics from time to time (that can last months).

I just wanna apologize to the readers who expects me to update regularly and ask that you have patience when it comes to my online comics. Thank you.
Posted by Remy 'Eisu' Mokhtar at 9:02 AM 3 comments: